Shepshed Jubilee Picnic in the Park


This was the third day of the Jubilee Weekend and it has to be said the weather did us no favours, especially considering it was such an auspicious occasion. There was a very brisk ‘breeze’ which meant we definitely needed to peg our music to the music stands. However, thanks to the foresight of the event organisers we were in an open fronted marquee so even if the threatened rain materialised (which it did) we -and the music – stayed dry.

The afternoon started with an hour from Long Eaton Silver Prize Band with assistance from our very own Henry on drums, followed by Karen Jamieson singing a wide variety of songs. We then played for an hour using music which we understood had special royal overtones.  A band enjoyed by Her Majesty (Abba), a royal residence (Holyrood march), Born Free (Her Majesty was in Kenya when she acceded the throne) Jerusalem and Fantasia on British Sea Songs (because everyone enjoys singing along to them.) We were lucky to be joined by vocalist Karen Jamieson for Jerusalem and Sea Songs and she definitely added a touch of festivity.

We were delighted that Joe Simpson, good friend to the band, joined us on trumpet and Yvonne Renouf played her heart out with the solo in Brown Eyes Blue. Our two oboe players, Paula Gardner and Rachel Gordon also covered themselves in glory during the playing of Sea Songs. A good time was had by all, Jubilee celebrations we won’t forget. 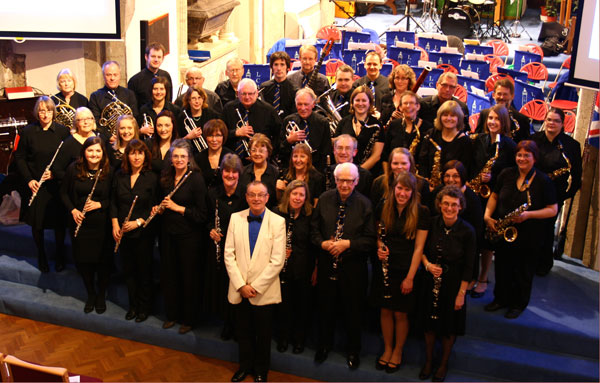